Japan–In the land of the Rising Sun

After a long and tedious flight we finally arrived in Tokyo Haneda, exchanged our vouchers for a 21 days JR pass, which allows you to travel free of charge by train all over Japan, and made our final leg of the journey to the city of Kanazawa…

Sashimi in a bowl on a bed of rice

Nigiri sushi (the sushi we consider as “classical”) is an invention or more a development forced by the Americans… The “old” type of sushi was pressed rice in larger cakes with fish on top of it. Yet after the 2nd world war war rice was rationed and the amount was just enough for some rice rolls with fish on top; so the Japanese traders in Tokyo then came up with this new concept which spread throughout the world… 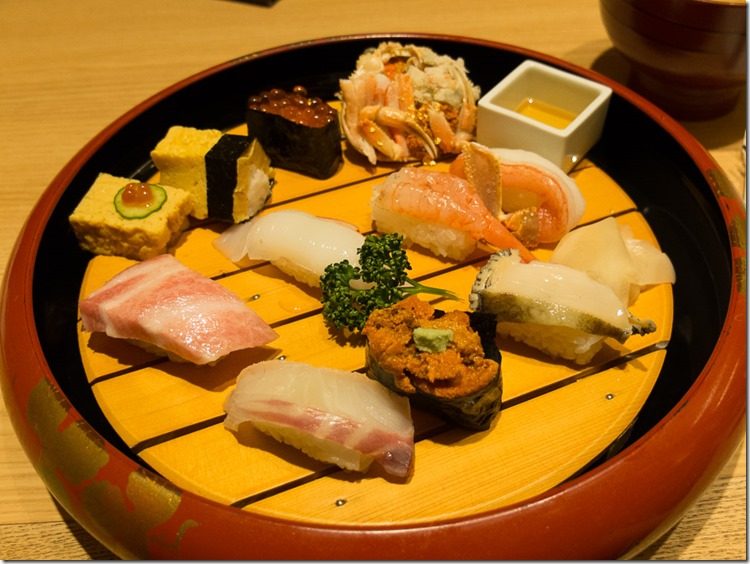 Crab with some gold flakes

Yummy – yet you have to get used to eat these (no, no worries, they are cooked…) 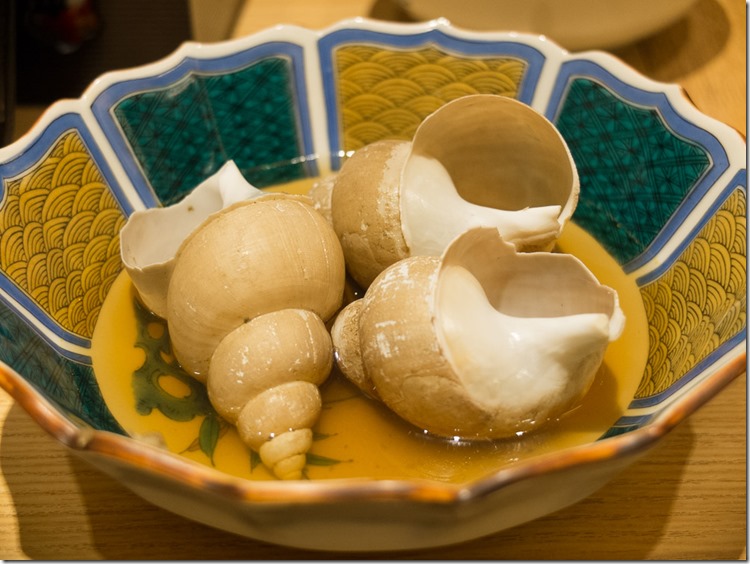 You still don’t understand, but at least you have an idea what it might be… 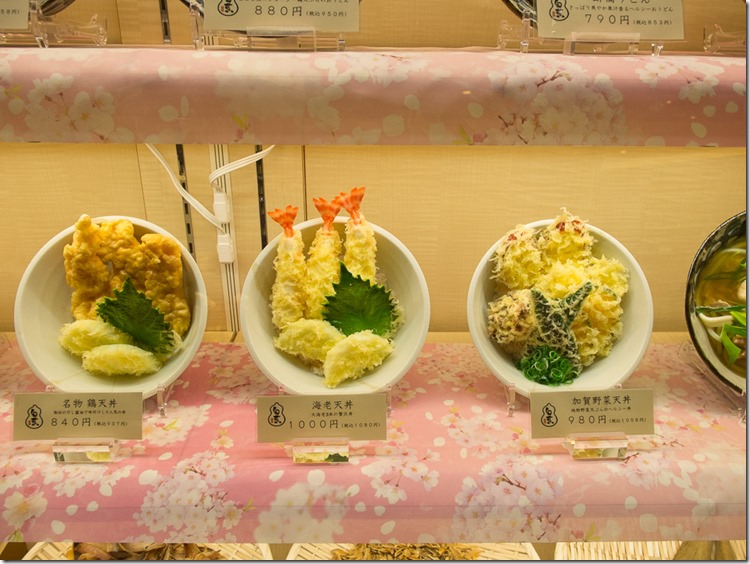 Little pieces of art themselves

The soup is a clear broth and the ingredients are made from a ground root called “cognac root”. It has virtually no (for us usable) energy content and tastes very nice. Especially the structure is quite interesting (chewy) 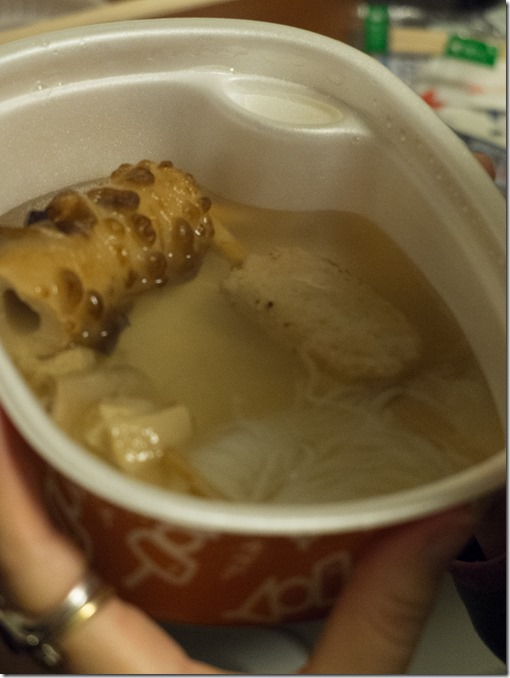 The downside is that most bars have a cover charge of around 500 YEN per person (approx. 4 €) but that’s part of the show…

And there is a lot of show 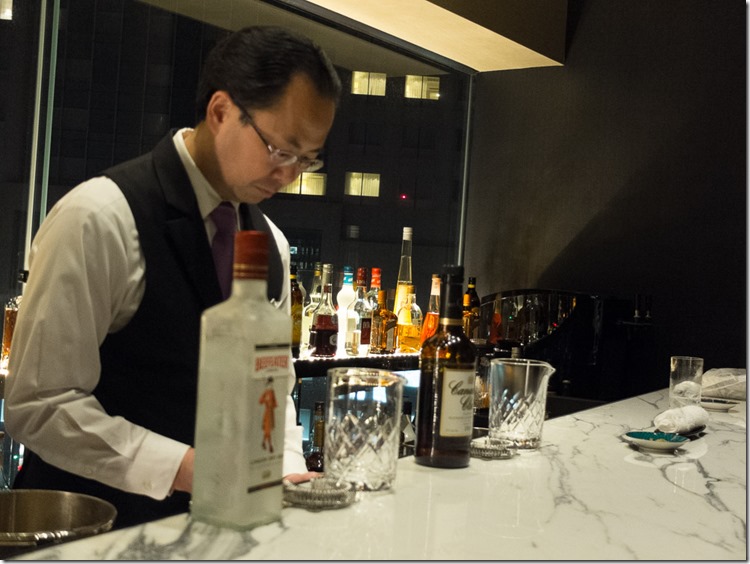 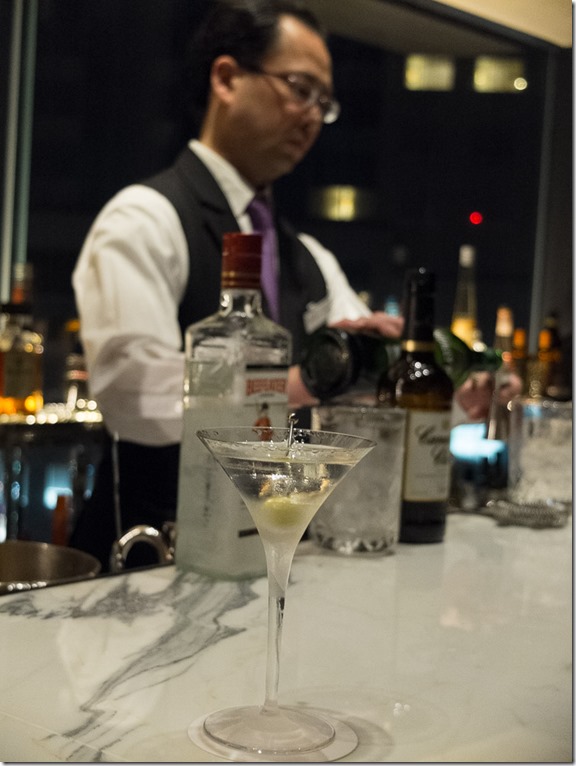 Ok, so we are in Kanazawa, a mid-sized city which became quite famous due to its castle and garden (Kenrouken), its museum of 21st century art and for its preserved older buildings (at least some parts of the city).

So in principal it’s the classical mix of elements you find in most places in Japan – old meets new, side by side

In this context temples are usually very interesting as most of them date back several hundreds of years and virtually remained unchanged – aside some restorations. So you can always get a good glimpse for the old there

Water siphons in dragon shape are quite common and usual 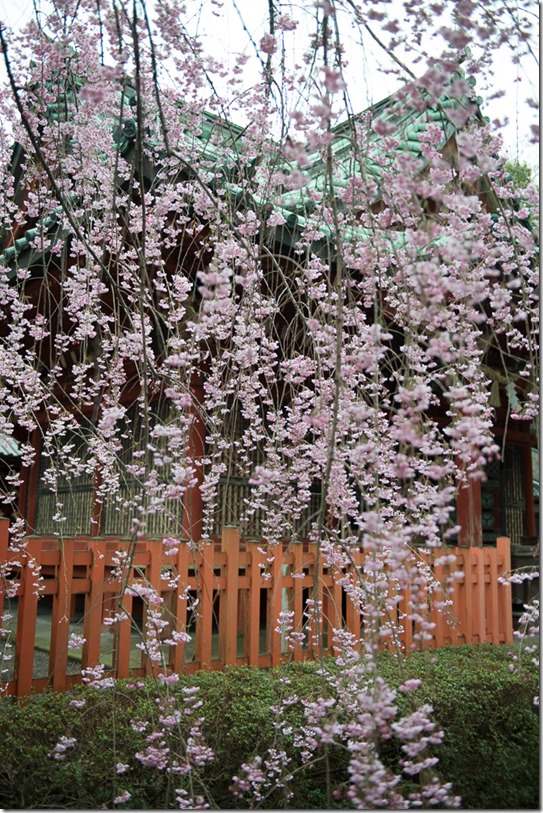 In a 17th century temple 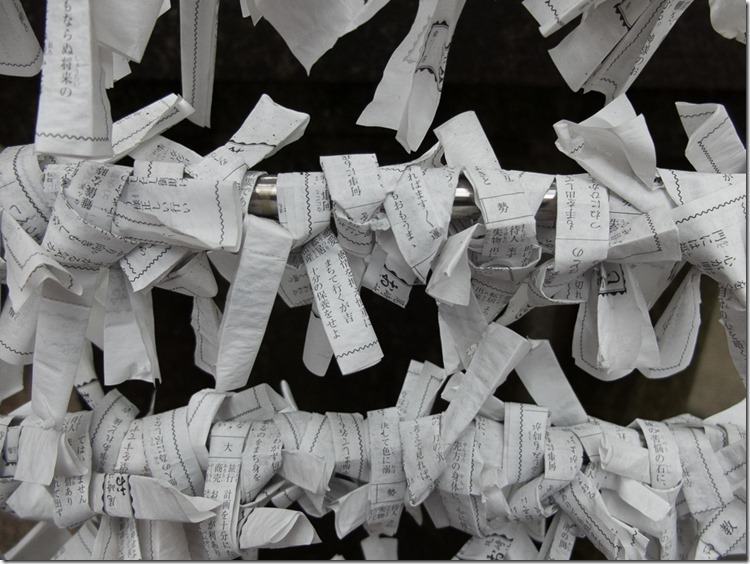 And an individual one…

We were heading for the art museum but had to discover that there were only 2 exhibitions at the moment… Architecture after the tsunami and a local artists’ show. Shocking… Kitsch pure… And this in an international art museum – what a shame… You were even supposed to pay around 8 € / person for each exhibition…

So we had some lunch instead…

Lost in translation once more… What do you order if no one speaks any English… Well, a dictionary is a good start and if that doesn’t help then producing animal sounds and pantomime makes it quite clear what you expect and are supposed to receive (hopefully)

Yet the final results were rather nice and tasty 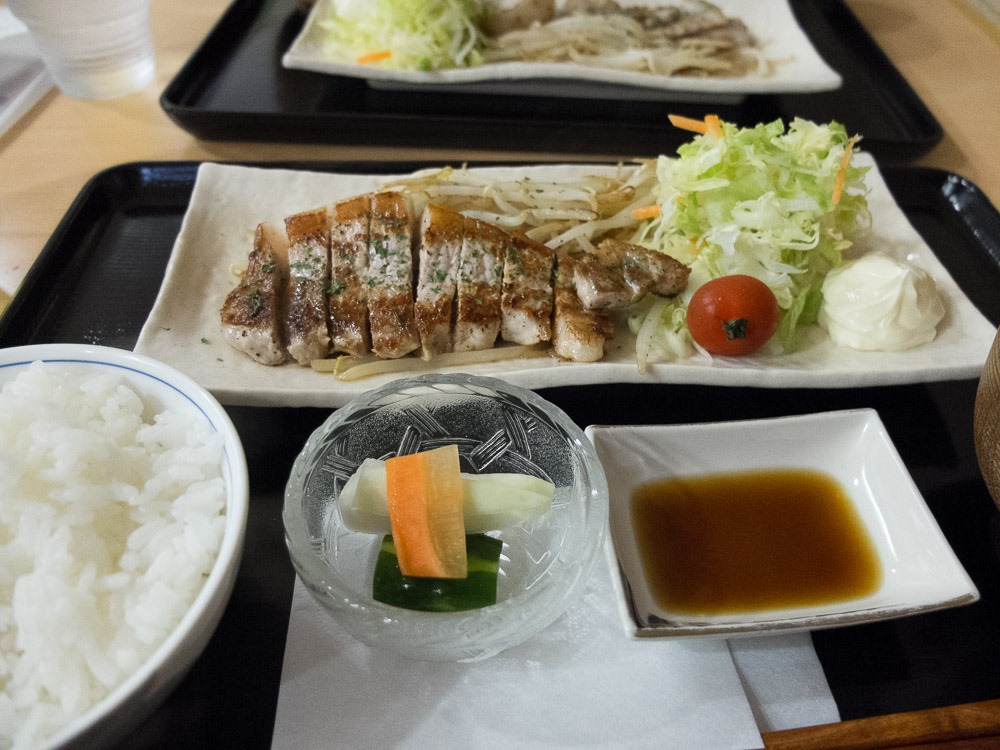 As the Japanese are quite mad about their cherries (and plums) they plant different varieties so that the blooming is extended. As it was pretty rainy this led to streets full of petals 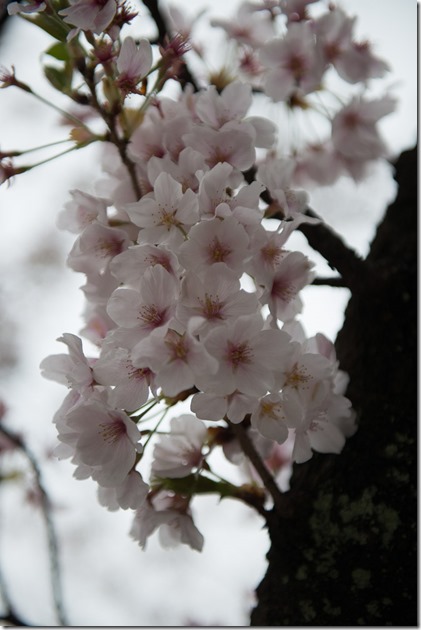 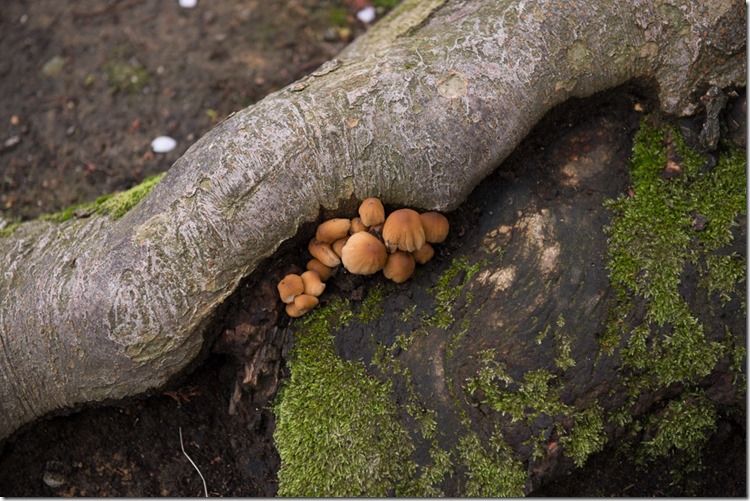 up to the castle 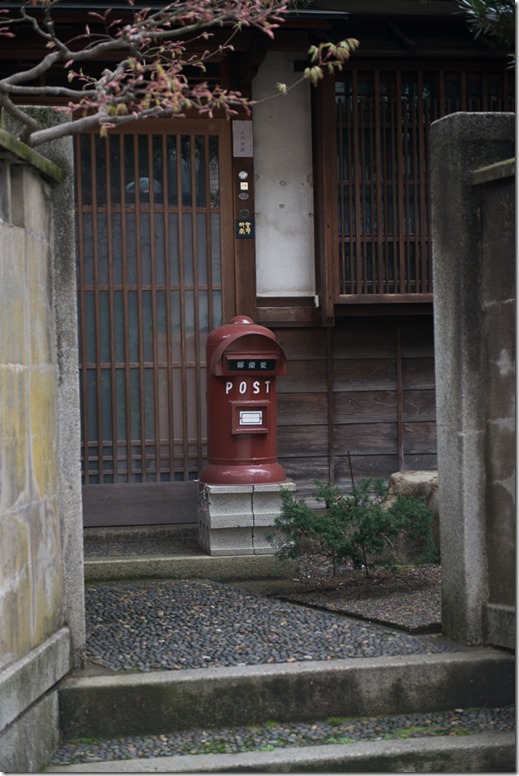 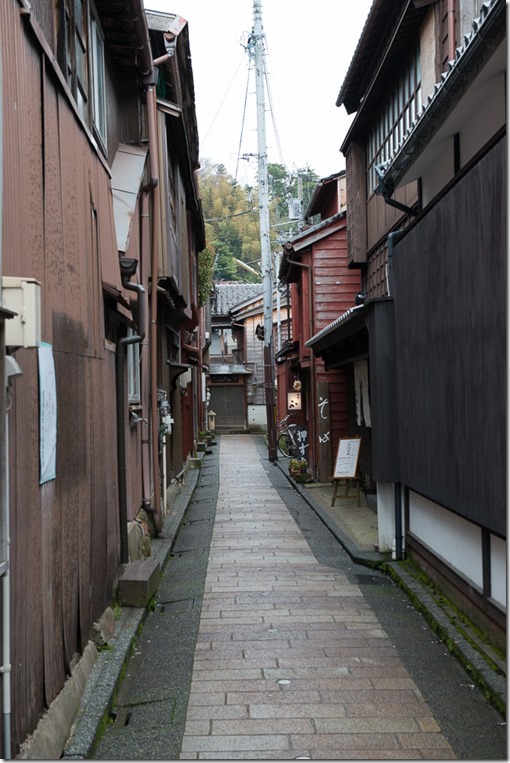 Here is one of the better preserved places – the only downside is that no-one really lives there. It’s more like an open-air museum with plenty of shops

The rain got harder and we had to shelter…

The traditional dress is worn not only for show occasions, but in everyday life as well. It depends very much on the occasion and family. If you go to a Kabuki theatre (classical Japanese theatre form), then you will see plenty of them…

And a very stylish loo 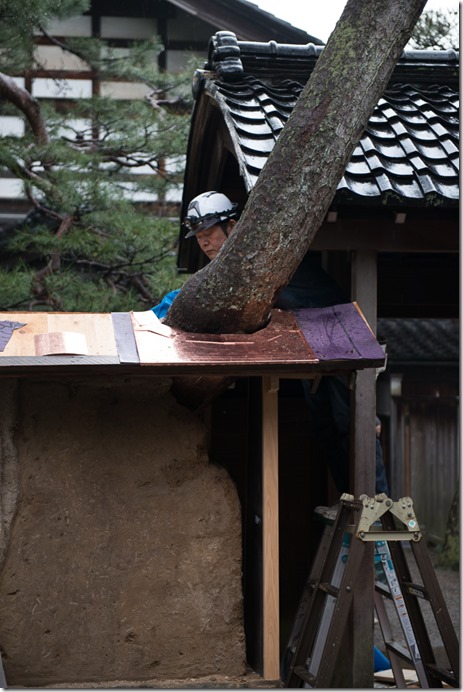 Which actually was very nice indeed

As they have so much moss, ferns, etc. 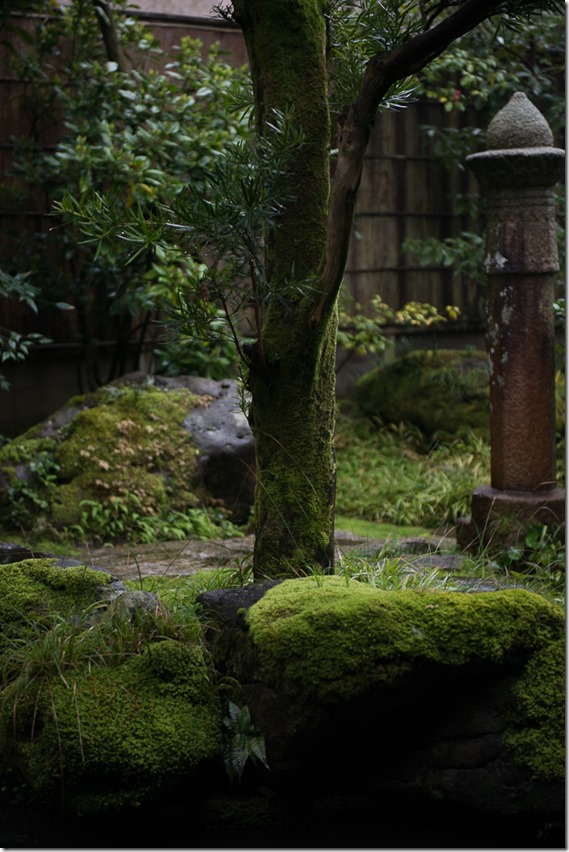 The path to the tea ceremony 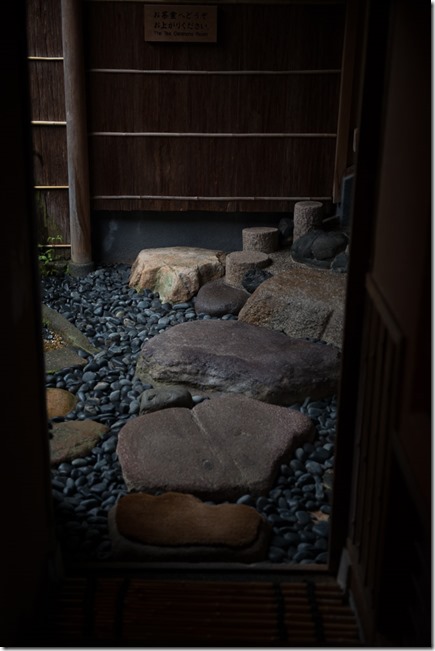 and a wonderful detail 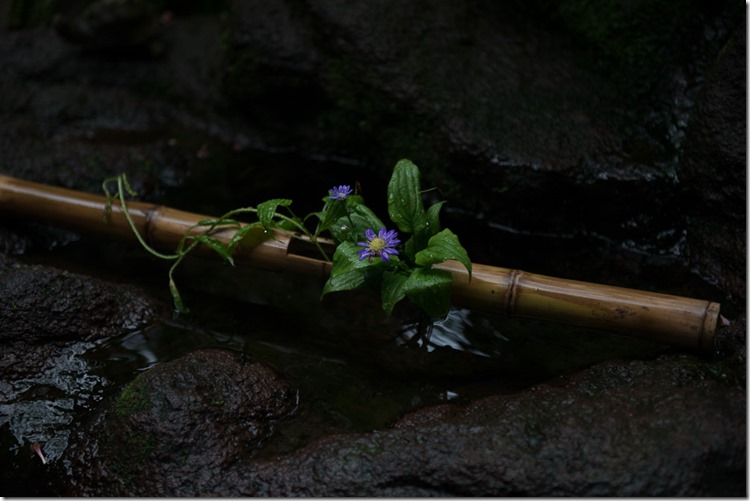 This is the view from the upstairs rooms over the garden

Another building with a beautifully aged lion

And there is the building as well… 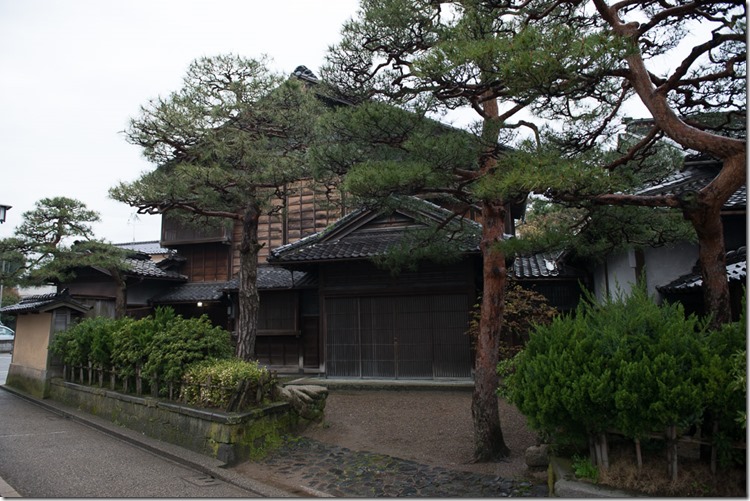 View over Kanazawa towards the Northern Alps

In the evening we headed to the food district… 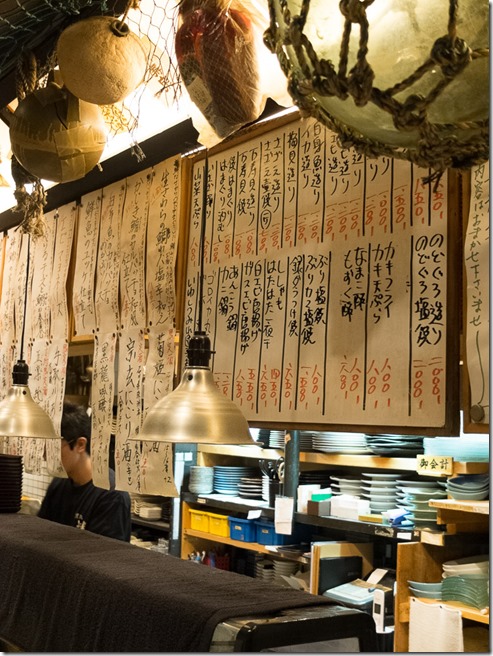 into a typical Japanese restaurant 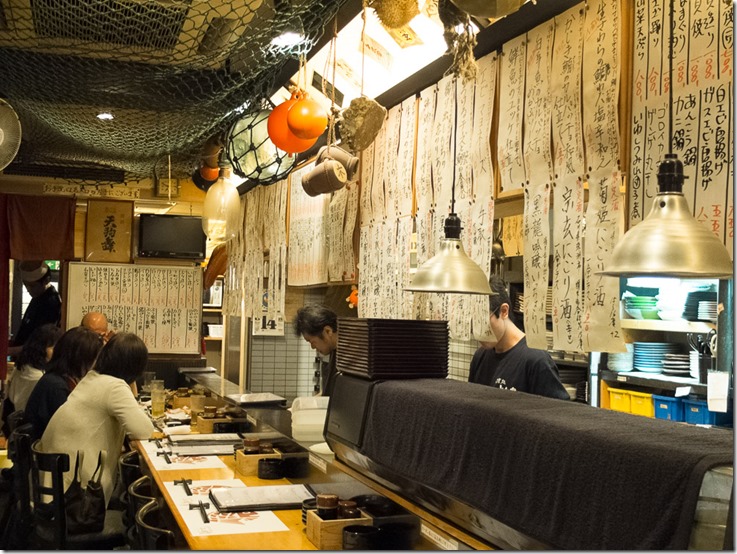 Well, without Japanese you cannot achieve a lot. The menu translation (if existent at all) mostly is quite abysmal and the interesting stuff not present 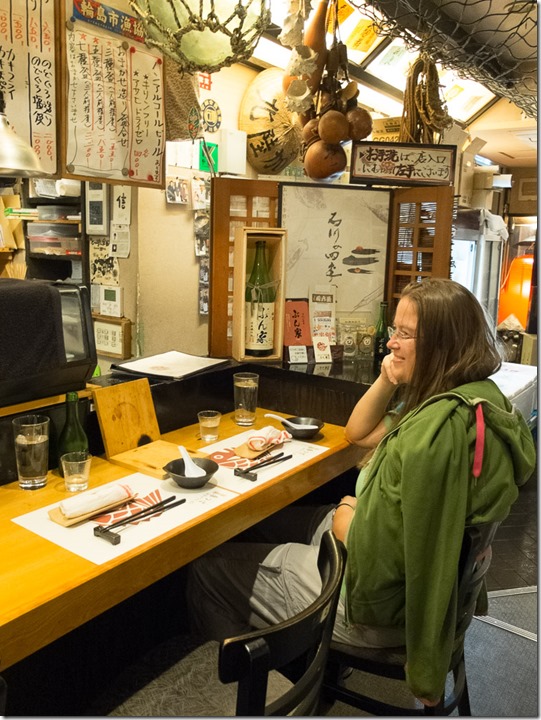 So in general you are in for some blind tastes – most of the time we ask the chef (cook) for suggestions and leave the choice to him… Works in 99,9% – and the 0,1 can be disposed off quite easily. 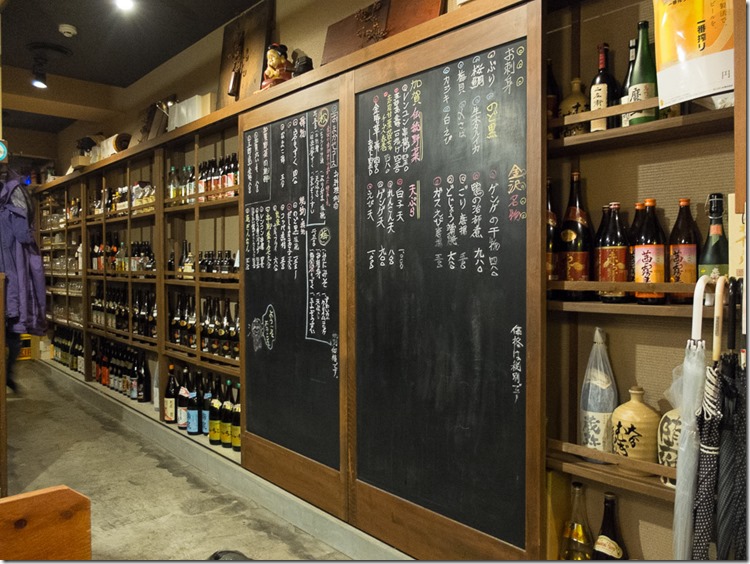 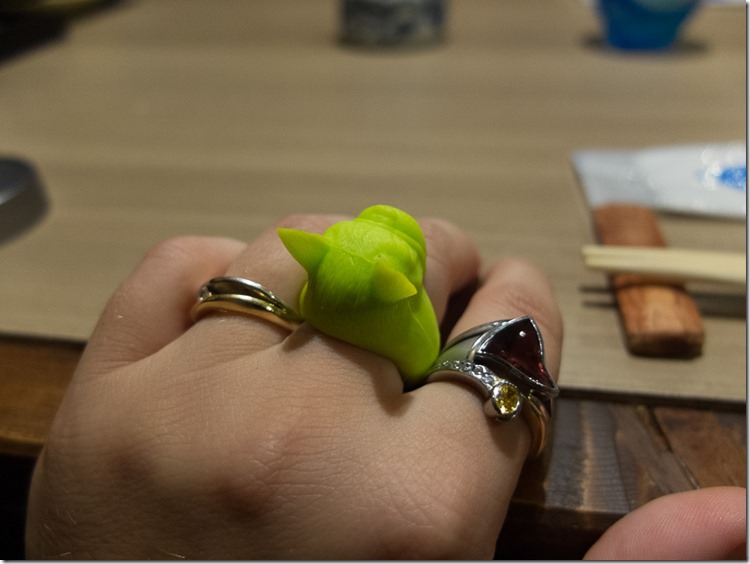